The Robert Washburn Memorial Award was initiated in 2021 to honor the life of a dear husband, Dad and Papaw. This award, offered annually, will gift the recipient a pre-paid registration for their Chincoteague Pony in the International Chincoteague Pony Association and Registry. The application period is open from October 1st thru November 1st each year, with the winner announced on November 6th - Robert’s birthday. Applications will be available online annually during this time.
​Robert grew up on a small family farm in rural Illinois, the youngest of seven children. His father, Dwight, raised Appaloosas; they were especially proud of the stallion that they bred and raised, Washburn’s Apache.
​​Robert moved to town but never lost his love of horses. His beloved pony, Cocoa, lived out her life on the family farm, and is still a fond part of the first equine memories of Robert’s daughters. 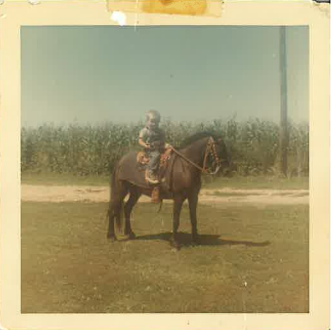 Robert on Cocoa (1965)
​Robert was an incredibly hard worker. For many years, he worked as a truck driver for local companies and enjoyed traveling around his corner of the Midwest but was home every night to be with his family. His last job was working for the City of Marshall, a position that he took great pride in. 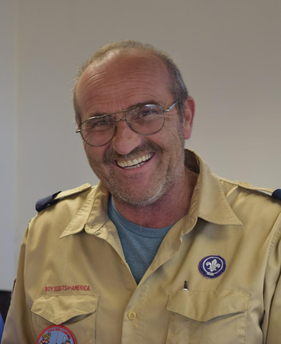 Robert was also a dedicated Cub Scout leader with Pack 81. He was a den leader, meeting weekly with scouts and their families, a Cubmaster, and committee member as well as a Shooting Sports Instructor for the district. He especially enjoyed teaching young Scouts at the BB gun and archery ranges. He volunteered at a variety of events from the pack to council level, working day camps and council weekend camps, often with one of his grandsons at his side helping out. He received the District Award of Merit for his dedication to the organization.

Robert also shared his love of horses with the Scouts, setting up a Horseback Riding Belt Loop workshop for his Pack. This allowed many Scouts their first opportunity to learn about how to care for a horse and to ride.

Robert passed on January 15, 2020 after a very short but incredibly brave battle with cancer. He was diagnosed at Halloween and gone just a few short months later. He was an amazing example throughout the entire ordeal, never losing his sweet, calm yet strong spirit.

His oldest daughter, Jamie, was blessed to accompany him to many of his doctor visits and treatments. It was such a special time, and she cherishes each moment. Jamie and her family had moved to a small homestead just a few months before Robert’s illness. This little property, lovingly named Grit and Grace Family Farm, was just off the route between Robert’s home in Illinois and his treatment center in Indiana. Nearly each time he and Jamie made the trek, one of them would find a reason that they needed to stop by the farm “for just a minute”. Both enjoyed these pit stops very much. Robert would tease Jamie about how fat and sassy all of the animals were and share stories about the animals on his family farm while he was growing up.

Like so many others, Jamie had read Misty of Chincoteague when she was a young girl and dreamed for many years of owning a Chincoteague Pony. That dream came true in the summer of 2020 when she purchased a foal from the online action. Jamie had poured over the foal’s pedigrees and dreamed of names for months. She had an absolutely perfect name picked out. After winning the bid for a pretty little chestnut filly (foal #2, Pappy’s Pony x Riptide), Jamie knew that the name wasn’t actually perfect . . . that this sweet little filly just had to be named after Robert’s beloved pony, Cocoa.

Robert was always up for an adventure and would have been thrilled to ride along on the 14 hour journey from Illinois to Chincoteague to pick up the foal.

When preparing photos for a memorial at the first anniversary of Robert’s passing, Jamie pulled out the photo of young Robert with his dad and Apache. When she checked Apache's registration form to verify his birth date, as the back of the photo was simply labeled “Apache, 2 days old”, she was stunned to discover that Apache was born on April 2nd. . . the exact same day her own sweet Cocoa was born.

Cocoa, Pappy’s Pony x Riptide’s 2020 filly
​Jamie and her sister, Kayla, are honored to sponsor this annual award in memory of Robert, to celebrate his life and his love of horses, family, and community.
Recipients of the award include: